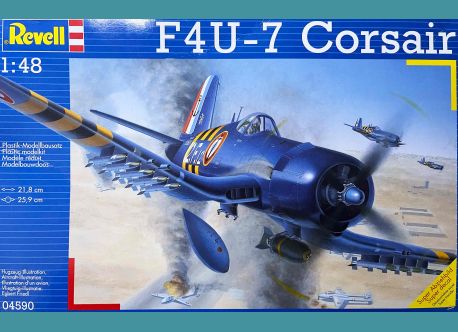 In February 1938, when the US Navy invited tenders for a new fighter-interceptor for service on aircraft carriers, the specifications seemed like a request to square the circle. They asked for a top speed of over 560 km/h at an altitude of over 6,000 m, combined with a robust airframe for landing on aircraft carriers and outstanding low-speed flight characteristics. Chance Vought Aircraft Division finally received the order to build a prototype of one of two concepts submitted, under the designation XF4U-1 Corsair (X stands for experimental). It was to be powered by a newly developed 18-cylinder radial engine from Pratt & Whitney, the R-2800-2 Double Wasp with a capacity of 2,000 hp. In order to take full advantage of this capacity, a three-blade propeller with a diameter of over 4 metres was provided by Hamilton Standard - the largest propeller ever built for a single-engine fighter. In order to obtain the required ground clearance without making the landing gear too long and therefore too bouncy for touchdown on aircraft carriers, an "inverted gull" wing was decided upon. The landing gear was located now in the salient angle. This solution gave it not only the necessary ground clearance, but also a range of other advantages: the wings could be split at a lower point and folded up to save space, the pilot's downwards visibility was substantially improved and the emergency flotation characteristics were much safer. During the Second World War, the FU Corsair, in various versions, in over 64,000 missions, proved to be the superior naval aircraft that the US Navy had hoped to obtain for its tender specifications. With a loss rate of 11.3: 1 (only 189 Corsairs were lost) it had the best performance record of all fighters in World War Il. When the French Naval Air Force, Aeronavale, was looking for a carrier-borne fighter in the fifties, the Corsair was the obvious choice - more particularly a version tailored to meet the requirements of Aeronavale. They took the best features from the versions already built and had a "French" Corsair built by Chance Vought under the designation FAU-7. This Corsair was essentially a mixture. It had the fuselage of an AU-1 Corsair and the raised cockpit and larger canopy of the F4U-5; the 2100 hp R-2800-18W engine was built tilting downwards by 5 degrees as in the F4U-5 and with the convex lateral engine cowling of the AU-1, but with an additional intake lip on the underside like that of the F4U-4. The wings with their built-in four front-facing 20 mm M3 cannon, together with underwing weapons stations for bombs and rockets, were like those of the AU-1 Corsair. 94 of the F4U-7 were built. The first machine from this series flew on 2nd July 1952 and the last rolled off the line in December 1952. At that time the first machines were already back in combat. In missions in Indochina (Vietnam) up to the fall of Dien Bien Phu on 7th May 1952, the Corsair proved to be the backbone of the navy fighters. Two years later the French Corsairs were back in combat, this time as part of the European coalition in the Suez Crisis - the war against Egypt over access to the Suez Canal. In Operation Musketeer in November 1956 the 14th carrier flotilla from the "Arromanches" and the 15th from the "La Favette" were used. Another unit, the 12th flotilla, was kept in reserve - an aircraft from this unit can be built from this Revell model kit. The next war was not long in coming for the Corsair. In the Algerian War, in addition to the FAU-7, a range of AU-1 Corsairs was used that had originally been borrowed from the US Marine Corps and later, after an upgrade, bought. An aircraft from the 17th flotilla, which can also be built with this Revell model kit, dates from 1961 in this Algerian period and also an aircraft from the 57th flotilla which was used for Corsair pilot training. It was not until the F-SE (FN) Crusader was introduced at the end of 1964 that the remaining F4U-7 Corsairs were retired from service with the 14th flotilla aboard the carrier "Arromanches".