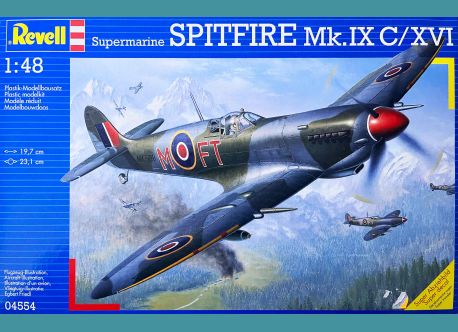 The prototype Supermarine Spitfire flew on 26 March 1936, and the first Spitfires for the RAF were delivered in May 1938; by August 1940 there were 19 squadrons of Mk.ls and Ils. These early Spitfires were barely superior to the German Messerschmitt Bf109E and in order to maintain superiority the more powerful Mk.V. with a Merlin 45 engine was produced. The Mks. Vb and Vc were cannon-armed versions, the Vc equipped with what was known as the 'Universal' wing; Mk.Vs went into mass production, entering service early in 1941, with some 5,000 delivered by late 1942. During 1941 the German Air Force brought the Fock Wulf Fw190A into service, this proving superior to the existing Spitfires. A new Spitfire, the more powerful Mk.VIl, was planned but being a major redesign production difficulties would delay its entry into service. À quicker solution was to improve the Mk.V airframe by fitting the more powerful Merlin 61 series engine driving a four-bladed propeller and standardising on strengthened universal C' wings. Further modifications were the fitting of the larger radiator under the port wing, and provision for fitting bomb racks; early production Mk.IXs were converted Mk.Vs. There were several Mk.IX variants, denoted by their prefixes; the main versions were the FIX fighter, the LF.IX low-altitude fighter and the HFIX high-altitude fighter; these designations denoted the altitude ratings of the Merlin engines and were not indicative of the wing type fitted; wings could be standard span, clipped or extended span. A further modification was the 'e' wing, with the long 20 mm cannon barrels outboard and provision for two 5 in. (12.7mm) Browning machine guns. Late series Mk.IXs also featured the broad chord pointed rudder. From 1944 the Spitfire Mk.XVI entered production; this was a MkIX fitted with the American Packard-built Merlin 66 low-rated engine. Externally indistinguishable from the Mk.IXe, all were built at the Castle Bromwich factory and all were fitted with 'e' wings. The first Spitfire Is entered service with No.64 Squadron RAF in July 1942, and from then on proved very effective in countering the Fw190s in the European and Middle East theatres. In production until the end of the war, grand totals of 5,739 Spitfire Mk.Is and 1,054 Mk.VIs were built, these serving with 79 operational RAF squadrons, 23 Allied squadrons (Belgian, Dutch, Free French, Norwegian and Polish) under RAF Fighter Command, 12 Canadian, three Australian and nine New Zealand squadrons. Post war many were exported to other countries and the type was still in widespread service around the world until the late 1950s. The Spitfire F.k.IX had a maximum speed of 657km/h (408 mph) at 7,620m (25,000ft), and was armed with two 20 mm cannons and four 303in. (7.69mm) or 12.7mm (0.5 in.) machine guns in the wings. Wing span: 11.22m (36ft 10in.), or clipped wing 9.79m (32ft 2in.) Length : 9.46m (31ft 1 in.) or 9.55m (31 ft 4.5in.) with broad chord rudder. Height (propeller vertical): 3.49m (11ft 5.5in.)