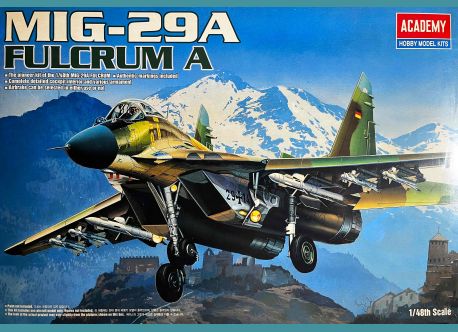 Flown by the former member nations of the USSR plus India, Syria, Iraq, Yugosiavia, Gearmny, Poland, Romania, Bulgaria, north korea, the Czech Republic, Slovakia and Cuba the MIG-29UM is not only a two-seat trainer, but is fully combat effective as well.
The two-seat version does not carry the chaff dispensers or the pulse Doppler radar found on the single seat fighters, but otherwise is fully armed and equipped with a full compliment of combat avionics. Generally, each squadron of MIG-29 fighters has two to four trainer versions for pilot and/or ombat weapons training, The instructor sits in the rear, elevated ejection seat for pilot training, evaluation or weapons proficiency ratin.
Designed at the same time as the MIG-29A, it is estimated that over 250of the two-seat versions have been built and entered operational status. Well over 1,000 MIG-29's of all types have been manufactured and are still being made to this day, Fully equal to the F-15 or F-28 in performance, the MIG has the added stength of its quick and easy maintenance. Five mechanics can remove, replace and test an engine under field conditions in less than one hour! In this day of super-sophisticated engineering, the simplicity of the MIG design ensures that it will be a very important combat airplane well into the 21st century.
This model depicts a late production version of the improved MIG-29UB, The kit has been engineered from highly detailed Russian drawings and mony photographs taken both in Moscow and other countries when the MIG-29s made demonstration visits.