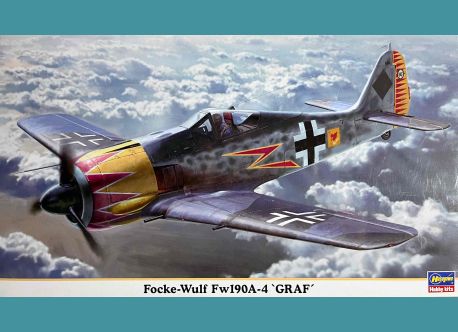 The Fw190 was developed to perform a supporting role for the Luftwaffe's mainstay fighter, the Messerschmitt Bf109. The Focke-Wulf was powered by a radial engine - - a rare feature in a European fighter of the era. With a tough construction and superb maneuverability, the efficiency and practicality of the design afforded the Fw190 considerable versatility, and modifications and variants meant the aircraft was able to perform a wide variety of combat roles through to the end of the war.
The Fw190A-4 is considered to be the definitive model of the "A" series, armed with two MG17 7.92mm machine guns, two MG151 20 mm and two MGFF 20 mm cannons. Fundamentally the same airframe as the A-3 model (which had a total production run of 509 aircraft), the A-4 was fitted with a BMW801D-2 engine equipped with the MW50 methanol-injector, a powerplant arrangement capable of producing some 2100hp and that raised the aircraft's maximum speed to 670km/h. Other upgrades included fitting with the new FuG16Z aerial radio, which required a new mast antenna to replace the earlier tail antenna attachment arrangement. Some units tasked with Reich air defense flew A-4s fitted with the improved FuG16Z-E; some of the aircraft thus fitted were visually distinguishable by the morane antenna they carried protruding from the lower surface of the left wing.
(Data Fw190A-4)
Length: 8.85m;
wingspan: 10.5m;
height: 3.95m;
top speed: 670km/h; engine: BMW801D-2 (1,730hp at takeoff throttle);
fixed armament: MG17 7.92mm machine guns × 2, MG151/20 20mm cannons x 2, MGFF 20mm cannons × 2.