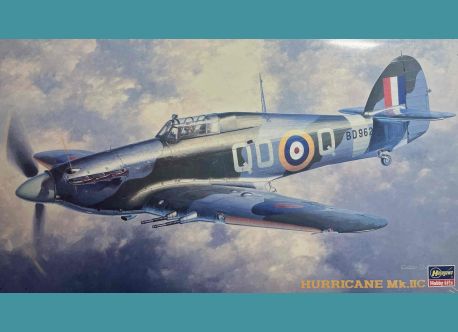 The MkIIC Hurricane came about when the British Air Ministry requested a single seat day and night fighter armed with four 20mm cannon. Hawker proposed fitting cannons to their Hurricane: however the government did not feel that the airframe could take the abuse of the 4 cannons, so they gave the contract to the Westland corporation for their twin engined Whirlwind. There were very few 20mm cannons around in those days and England had approached Hispano Suiza for a license to build their cannons in England. Hispano Suiza refused: however, they set up a production plant in the UK to provide cannons for the Whirlwind. Hawker did a feasibility study using a Mk I Hurricane with four Swiss 20mm Oerlikon cannons in fairings mounted under each wing. They then adapted a pair of battle damaged wings to accept internally mounted Hisso cannons using the drum feed mechanics. Except for a slight loss is top speed, the cannon armament proved itself, and there followed regular shipments of Hispano Suiza cannons for the new Mk II Hurricanes. The speed loss was overcome with the installation of the new Rolls Royce XX 1,260hp engine, and the MkIIC Hurricane went on to become the most produced version during the war with 4,711 built.