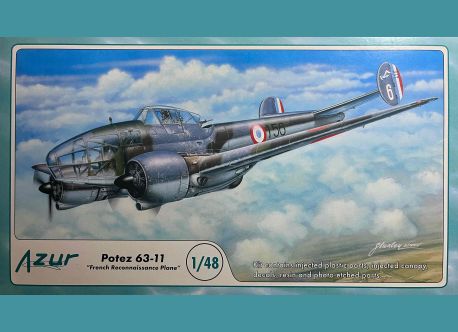 Twin-engine Potez 63 line planes were in the closely prewar French air force counted among very expanded aircraft. They were used as heavy and night fighters (Potez 630, Potez 631), tactical bombers (Potez 633) and tactical reconnaissance planes (Potez 637). The last version Potez 637 for tactical reconnaissance was fitted with a nacelle for observer, otherwise except details it corresponded to the version Potez 631. Its application was a temporary solution until the arrival of the specialized tactical reconnaissance plane Potez 63-11. This started also from the design of the line 63, but the plane's fuselage was from the gunner's stand forward quite new, shaped according to requirements on a reconnaissance plane. The ample canopy of the nose enabled the observer to have an excellent view. After successful test Potez 63-11 was ordered in large series. The production was so fast, that engines and adjustable propelers became short. Therefore some machines were flying with two-blade fixed propellers. The machines saw combat in February 1940. In May of the same year, in the time of the beginning Blitzkrieg Potez 63-11 served at 34 units, long range reconnaissance (GR - Groupe Reconnaisance), as well as observation (GAO - Groupe Aeriens d' Observation) units.
The intensive combat engagement was despite the high performances of the Potez machines, accompanied with high losses. Luftwaffe's superiority was crushing and the French fighter air force was unable to secure protection to reconnaissance planes after capitulation of France. The Potez planes remained in Vichy France units and got in service of Luftwaffe and its satelites (Italy, Rumania, Hungary). One machines was interned and used in Spain, several pieces were used by the No.2 Flight of Free French in Haifa.
span: 16,00 m, length: 10,5 m,
max. speed: 428 km/h in 5500 m altitude, ceiling 8500 m, range 1500 km,
armament: 3x to10x machine guns MAC 7,5 mm, according to arrangement, 4x 50 kg bombs